Posted on April 17, 2013 by janewalkerscards 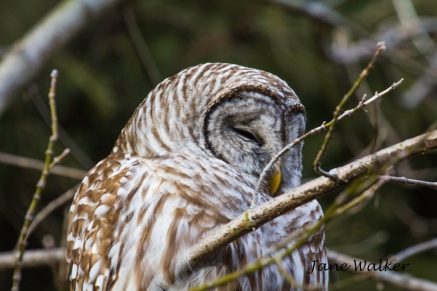 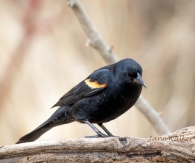 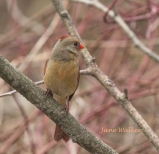 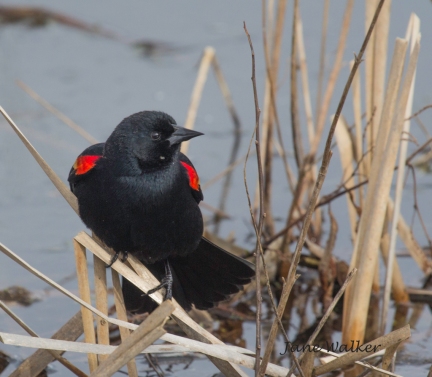 During the past few weeks, while waiting for spring’s delayed arrival, I’ve continued to visit local nature areas as well as my own backyard feeders and wooded trails.  Lynde Shores and Hall’s Rd., located in Whitby, Ontario are less than a mile apart with a large marshy area in between.  This area is known for its large selection of water fowl as well as song birds. Many of the birds are very accustomed to people and many will take seeds right from your hand. It’s a wonderful place to take children and for photographers to get some great close-up shots.

Two weeks ago, I set out for Hall’s Rd. to try my luck at photographing the “resident” barred owl. It was a cloudy, blustery day by Lake Ontario.   I was fortunate to see the owl on a low branch with very few twigs obstructing my view. Occasionally, he would open his eyes but most of the time, he appeared to be sleeping. An hour later at Lynde Shores, it began to snow and along with the birds found myself in a sea of twirling snowflakes. A moment later, I was rewarded with the sighting of a Great Blue Heron. Above is a collection of photos taken on my recent visits to these 2 areas.

Jane Walker is a Newcastle photographer who creates framed photographs, photo trays and matted greeting cards reflecting the beauty of nature and gardens. Her recent interest in birds, owls and other wildlife is now being reflected in her posts. As a member of the Oshawa Camera Club, Jane has started to enter some of her photos for judging and appreciates the critiques by the judges. You'll be surprised at what shows up under the guise of "janewalkerscards".
View all posts by janewalkerscards →
This entry was posted in Uncategorized and tagged barred owl, Cardinals, chickadees, Great Blue Heron, Hall's Rd.' Whitby, Lake Ontario, late spring, Leisistic Chickadee, Lynde Shores, nature, owls, Red Winged Blackbirds, song birds, Water Fowl, Woodpeckers. Bookmark the permalink.

Leave a Reply to Inspired and pretty Cancel reply