Posted on January 9, 2014 by janewalkerscards

Compared to the last winter, there were fewer birds at my feeders until late December.  After the first big snowfall, followed by the unforgettable ice storm on December 21st.,my bird feeders were suddenly needing to be replenished twice a day.  The trees and bushes were covered with at least one inch of ice making it a challenge for the birds to access seeds and bugs. Many varieties of birds, not to mention the squirrels, began “flocking” to the feeders!

As well as the black oiled sunflower seeds which I normally provide, I began putting out processed suet cakes and real beef suet in metal holders and even in mesh bags. The suet was mainly for  the woodpeckers which I had noticed in increasing numbers pecking at the old maples in our yard. I was delighted to see that as well as the little downy and larger  hairy woodpeckers, a female red bellied woodpecker was coming into the yard  every day. Many people who feed birds, have never seen a red bellied woodpecker and “ours” is now a regular visitor!  Time after time, I could hear her unusual call from high in the trees and tried many times to get a nice clear photo of this 9 inch woodpecker when she was not clinging to one of the feeders. In the photos that follow, you will see that I “captured” her closer to eye level and also got some nice close-ups of the other woodpeckers.

NOTE: The red bellied woodpecker has a red “cap”…the female’s does not extend over the top of her head like a male’s. The name “red belly” is for me a bit misleading as you hardly ever see the light pink feathers on their “tummies”. 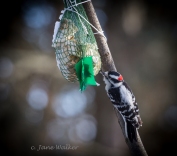 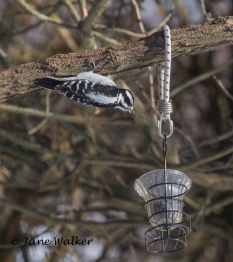 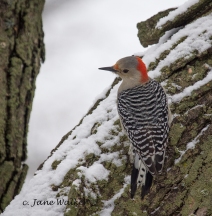 Jane Walker is a Newcastle photographer who creates framed photographs, photo trays and matted greeting cards reflecting the beauty of nature and gardens. Her recent interest in birds, owls and other wildlife is now being reflected in her posts. As a member of the Oshawa Camera Club, Jane has started to enter some of her photos for judging and appreciates the critiques by the judges. You'll be surprised at what shows up under the guise of "janewalkerscards".
View all posts by janewalkerscards →
This entry was posted in Uncategorized and tagged bird feeders, bird photography., birds of North America, birds of Ontario., Downy Woodpecker, feeding birds, Hairy Woodpecker, Nature Photography, red bellied woodpecker, suet feeders. Bookmark the permalink.

11 Responses to Woodpeckers at Work