Posted on April 27, 2014 by janewalkerscards

Meet Casper. He is the oldest of my 2 cats. At 14, he is still surprisingly active and seems to have all of his abilities. He is very small for a male but has always been a little guy. I found him as a tiny kitten “living in the streets” of Stouffville. He was pretty lucky to find me and I have to say his gentle nature has brought me a lot of happiness. When we moved to the farm 10 years ago, Casper adjusted quite well to country living. He has always loved the outdoors, however, this past winter was just way too cold and snowy for him to venture out very often. The photos above and below are of Casper last fall.

Winter came early this year limiting the time spent outdoors for both humans and pets.  One snowy winter evening, while Joe and I were watching a P.B.S. show on the intelligence of ravens, we noticed that Casper was responding to the sound of the birds. He was also watching intently and began to approach the television for a closer look. I will attach the photos I took of his increasing interest and curiosity. This old cat obviously doesn’t have any sight or hearing problems. He may, however, believe that the people and wildlife which he sees on the screen live somewhere behind or inside it! 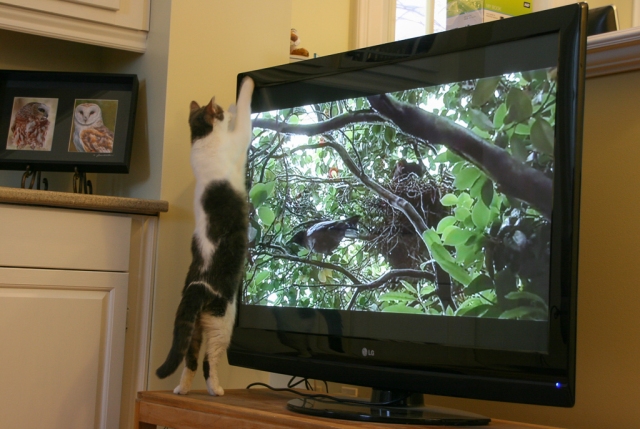 Jane Walker is a Newcastle photographer who creates framed photographs, photo trays and matted greeting cards reflecting the beauty of nature and gardens. Her recent interest in birds, owls and other wildlife is now being reflected in her posts. As a member of the Oshawa Camera Club, Jane has started to enter some of her photos for judging and appreciates the critiques by the judges. You'll be surprised at what shows up under the guise of "janewalkerscards".
View all posts by janewalkerscards →
This entry was posted in Cats and tagged Aging Cats, cat photographs, cats and birds, cats and nature, Cats in winter, Cats watching television, Curiosity of cats, family pets, Meet Casper, Old cats. Bookmark the permalink.