Since creating my protected areas for birds, I was always hopeful that I could attract Baltimore Orioles. If I was fortunate enough to catch a glimpse of these elusive birds, it was early in May. My attempts to keep them around my bird gardens were  quite futile.

I had always read that the trick was to put oranges out and also to purchase oriole nectar feeders. I did both of these things but found that after a visit or two in the early spring, the oranges would spoil without a sign of even a nibble. I wondered if the problem was the lack of a stream near our house. Early this year I read that orioles love grape jelly. Thinking it was worth a try, I found some different containers, an oriole feeder with a well for nectar, a half orange, and jelly.

I was in luck! In May, shortly after setting up a few homemade feeders and those that I purchased,  I saw a pair of Baltimore Orioles using the different feeders. By far, the favourite food was the jelly. I eventually gave up on the oranges because unless I hollowed them out and filled them with grape jelly, they were ignored.  After a short hiatus, the pair were back with their young! I took photos of them through my front glass door so those that I will share with you may not be the best quality. Also, the various feeders and perches are functional rather than works of art. The one pretty purple one confused one of the little “guys”.  You’ll see him trying to eat a glass berry!

It is the end of July. I rarely see the parents but numerous times a day the juveniles come either together or on their own for their treat.

If you want to attract orioles, you just might want to invest in a few jars of grape jelly and find a way to hang them in your garden. 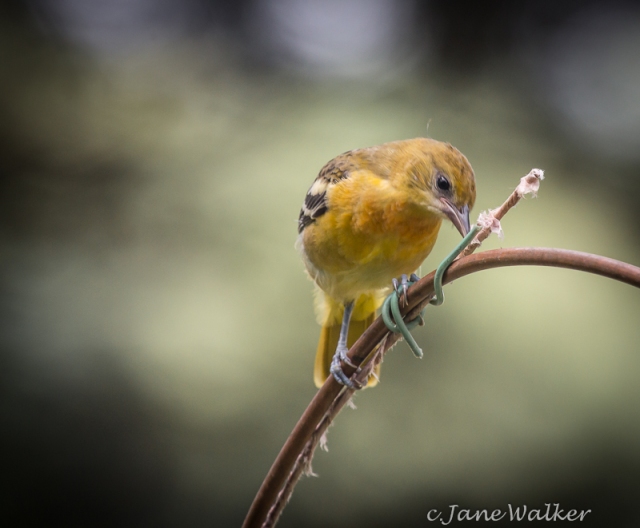 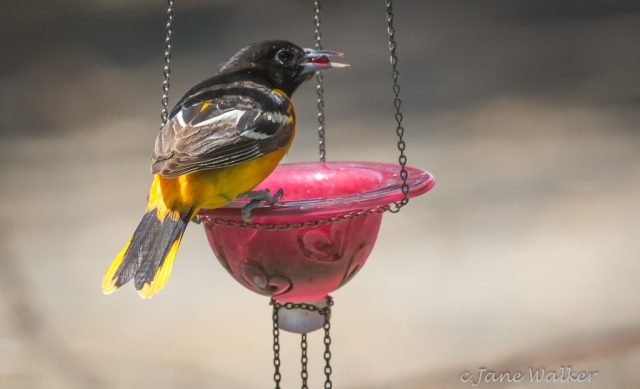 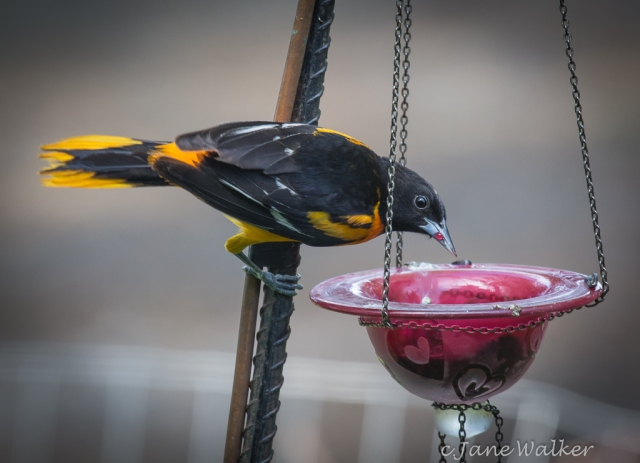 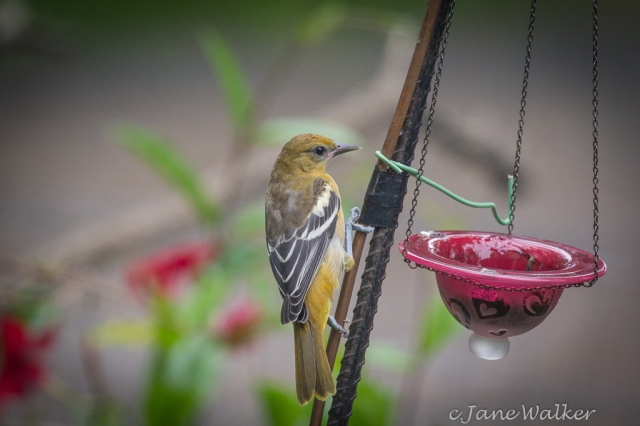 Jane Walker is a Newcastle photographer who creates framed photographs, photo trays and matted greeting cards reflecting the beauty of nature and gardens. Her recent interest in birds, owls and other wildlife is now being reflected in her posts. As a member of the Oshawa Camera Club, Jane has started to enter some of her photos for judging and appreciates the critiques by the judges. You'll be surprised at what shows up under the guise of "janewalkerscards".
View all posts by janewalkerscards →
This entry was posted in Gardens, Photographs of Birds, Photography and tagged Baltimore Orioles, bird feeders, bird garden, bird photos, birds of Ontario., grape jelly, juvenile orioles, Ontario, oranges for oriole, Oriole Feeders. Bookmark the permalink.